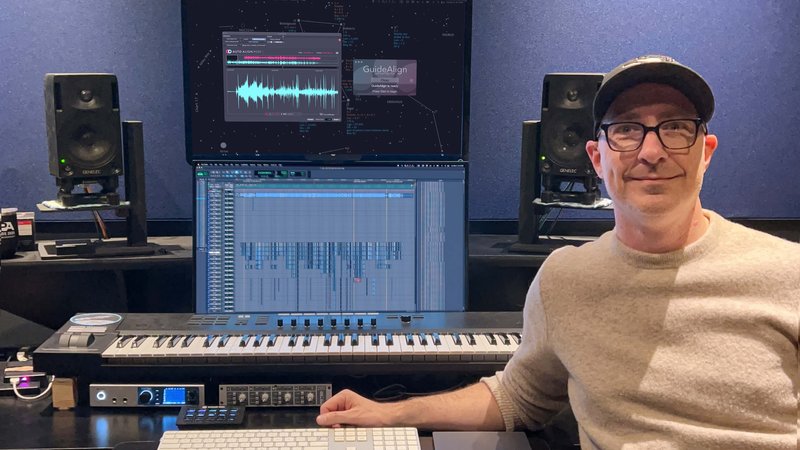 Dustin Harris is an award-winning dialogue editor and supervising sound and music editor with Sound Dogs Toronto. Dustin began his career in 2000 as an assistant engineer, recording and mixing music scores for films, TV shows, and ad campaigns. That work gave him insights into the different facets of audio post-production. He then moved into recording voice-over, narration, and ADR, which naturally progressed into working as a dialogue editor and re-recording engineer on documentary and lifestyle programs. Eventually, he crossed over into scripted work.
We talked with Dustin about Auto-Align® Post, his new SoundFlow 5 application 'GuideAlign', and much more.

Dustin, what are you currently working on?

I just wrapped the final season of The Expanse for Amazon Studios, and I’m currently working on season 3 of Netflix’s Locke & Key.

What excites you about your job?

I love collaborating with producers and directors in the world-building process, really drilling down on how I want environments to feel emotionally, establishing signature elements, and what aspects of the story we can tell through sound, both literally and metaphorically. I also love it when I can save production takes that have been assumed to require being picked up in ADR.

What are the challenges you are experiencing in your work?

What state is a typical dialogue file in when you receive it?

If we’re talking about the quality of dialogue, every project is different and there are so many variables, not only from a technical standpoint in what the sound mixers are up against in terms of coverage and environment but also what story we’re ultimately telling. Are we in the future, present, or the past? Are we in this world or another one? These things influence how I approach a dialogue edit, what to keep, what not to, what to accentuate, and what to underplay.

"GuideAlign works by combining the powerful automation of SoundFlow with the precise timing of Auto-Align Post."

And how would you describe a good dialogue recording?

I feel like sound mixers have a really challenging job, and I’m amazed at what they are able to do in some very challenging environments. The easy answer is a nice natural boom with no obvious swings and handling noise, and clean, clear radio mics with no clothing noise’ but it’s often not that simple. In lieu, I’ll take coverage; I can often work magic by combining channels together.

What makes a good dialogue editor in your opinion?

Being organized is a de facto requirement, having good ears is a must for evaluating the technical things like smooth edits, the differences in sound qualities between slates and takes, noise issues, processing artifacts, etc. Emotional intelligence and sensitivity are helpful when working with writers, directors, and actors about ideas and performance. An underrated quality is allowing yourself to believe in the story you’re helping to tell. Become a fan of the project.

How long do you usually get to deliver a project?

I’m not sure there IS a usual answer… every project has a different schedule and budget, and each project has its own needs from the sound department to help tell the story. Sometimes less is more, and sometimes a lot more is more.

How would you define a successful project?

There are a lot of ways to define success, and I’m sure a writer, a director, and a studio all have very different answers. For me, I feel successful when I’ve been able to realize the vision that the producers, directors, and showrunners have, and bring something of my own creativity to the table in the process. It’s a great feeling when you try something ‘new’, and it completely works for the project.

What is your work/ life balance during a project?

For me, usually tilts towards work. As a person, I don’t really ‘shut it off’ when I’m working on a project, I’m always thinking about ways to express the established ideas and themes. That said, doing activities unrelated to work; being outside, doing physical work, reading, working out, listening to podcasts, etc. Those activities often fuel my creativity in ways I can bring back to the screen.

Can you describe your workflow?

I tend to work in passes. The first thing I do is watch the whole show or film with my hands away from the keyboard, so I can get the feeling of the project, to see the forest before I start looking at the trees.
Next, I assemble the raw audio to match what was done in the picture edit (to give credit where it is due, my assistants usually do this for me), and start evaluating the production sound to see what needs fixing and if I can fix it editorially or if I’ll need to it pick up in ADR.
I then dive into the most difficult sections of the project technically and conceptually. I’ll send those to the re-recording mixer if it’s technical to see how it will play through their signal chain, and I’ll send it to the producers if it’s a concept thing to get their notes on it. Then I go left to right, laying out my tracks, deciding on my fades and handles, and flagging anything that needs extra attention from maybe outtakes or noise reduction, etc.

I was told about it by Jill Purdy, a phenomenal dialogue editor, and colleague. She was aware that I was phase aligning my audio by hand, syllable by syllable, and was delighted to inform me that there is a plug-in for that.

Phase-aligning is a critical part of my workflow. For me, being able to use any combination of the microphone channels of a scene, and in any ratio, unlocks so many more options for either repairing compromised audio, or matching production audio to ADR. But manually phase-aligning microphones that are moving is extremely time-consuming.
Auto-Align Post does this automatically and transparently, which saves me an amazing amount of time. It is so important to me that I’ve bound it to one of my F-Keys with the powerful macro automation software platform SoundFlow.

How long have you been a SoundFlow user and how did you get into it?

I was told about SoundFlow by another editor and friend Paul Talbott in late 2019. I started learning to make macros, then I started asking for help in the SoundFlow forums to learn how to make more advanced macros and scripts, often getting help from the SoundFlow CEO Christian Scheuer himself.
Then in mid-2020, a project I was lined up for was canceled due to the pandemic, and I had about 6 months of downtime until my next project. I decided to spend that time diving deep into SoundFlow, and the language the scripting engine runs on. Christian took notice of this via my non-stop forum questions and invited me into the beta testing group, and then eventually the developer group where he taught us classes on the most advanced aspects of the platform.
It was these developer classes that led me to develop my first SoundFlow app GuideAlign.

GuideAlign is now exclusively available on SoundFlow 5. What does this app do?

I used to use an app called Titan, by Synchro Arts. Titan did many things, but one thing I relied on it for was its ‘Fix Sync’ feature. Titan is no longer available, so I wanted to develop a way to restore that functionality within SoundFlow and improve upon it.

In a nutshell: audio files assembled with an EDL can be out of sync compared to the picture guide track by up to a frame in either direction. It's caused by a discrepancy between how some picture editing software works vs how some sound recorders work. Mark Franken at Sounds In Sync has a brilliant YouTube video that explains this phenomenon on the Sounds In Sync website if you want to deep dive into the particulars about it. GuideAlign works by combining the precise timing of Auto-Align Post with the powerful automation of SoundFlow to shift the assembled clips into sample-accurate sync to a picture guide track, without processing or creating new audio files.

Can you reveal your plans for this year?

The first thing is finishing the third season of Locke & Key for Netflix. Then there is a project that I might be involved in later this year that I’m extremely excited about but can’t talk about just yet. I’ve also started more apps for the SoundFlow platform which I’m excited about too. We’ve only seen the tip of the iceberg of what SoundFlow is capable of.

What advice would you give to newcomers in the industry?

If you are inspired by someone’s work, and they do what you want to be doing, reach out to them and ask to chat. Often those people are too busy, but sometimes they have time, or circle back when they have time, and love talking about their own passions and what inspires them.
Creative fields are networks of artists who all trust and respect each other’s work. Building those connections and relationships is the first step to gaining that trust.